Recommended:  Suvey Model (View) to identify the heights of contour to aid with deciding where to place the splint margin

Uuse the Mark Splint Margin function to designate the boundaries of the splint.  When you first click the Mark Splint Margin button, you will not be able to interact with any other part of Blender until the operator is complete or cancelled.  ‘LeftClick’ to place points on the model.  A curve will smoothly connect all the points drawn.  You can ‘RightClick’ on a point to delete it.  If you ‘LeftClick’ on an existing point, it will become selected (turn yellow) and you can press ‘G’ to unstick the point.  It will follow your mouse until you ‘Left Click’ to place it back on the model. Press ‘ENTER’ when finished.

You must click again on the first point to close the margin loop.  A warning will be displayed if the margin is not closed when trying to complete the operator.

Flat cutting is the easisets and most time efficient however it provides less control of fit and undercut engagement.  For initial testing/leanring, It is recommended to use this style of margin for simplicity. 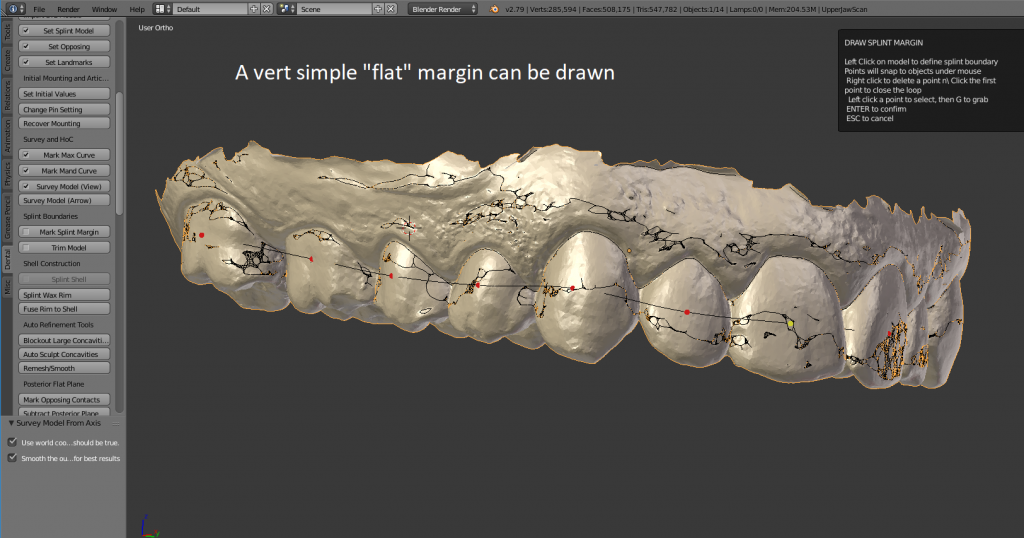 Scalloping margins (retainer style) is best achieved my placing a single point at the tip of the papilla, and then at the distal and mesial line angles near the ginggival margin  Some teeth may need a point at the gingival zenith.

It is fairly easy to make adjustments to the margin after the Trim Model step.  Simply press “Mark Splint Margin” again, and you will be put back into the Margin Marking mode and all the points you marked initially will be visible and able to be adjusted, new points added or points removed.  You can then press “Trim Model” again and it will re-calulated the Trimmed Model.

The margin line is a Blender Bezier object, the visibility and visualization of which can not be customized easily.  It often intersects or hides behind the Splint Model

Mismatched Height on Buccal or Lingual